This tenement which is located ~7km east of the Paulsens Gold Mine operated by Northern Star Resources Ltd (ASX:NST) (which has mined over 700k ounces at an average grade of 7.63 g/t Au) has been held by Strike for many years for its deposit of high grade hematite. Strike has historically conducted extensive drilling on the tenement for iron ore.

A review by Strike of the historical data within the tenement for other mineralisation has indicated the presence of a historical gold occurrence, hosted within conglomerate rocks on a faulted contact between the Fortescue Group and Ashburton Basin sediments.

Strike notes the potential of the Paulsens area, given the geological setting with mineralised conglomerates is similar to the Novo/Artemis gold discoveries, with these discoveries having opened up fresh geological models for gold prospectivity compared with traditional paradigms. 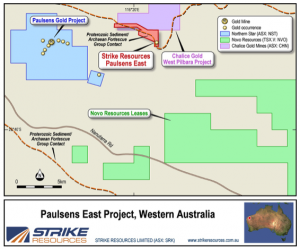 The nature of the geological setting of Strike Paulsen’s East tenement, with an existing gold occurrence hosted within conglomerate rocks, provides Strike with the opportunity to conduct further work within the tenement to determine the full extent of its gold bearing potential. 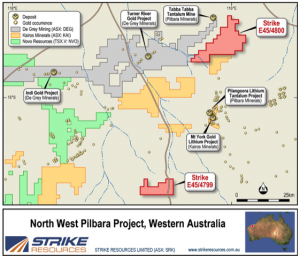 Strike notes that no recorded detailed sampling for gold has been undertaken historically within EL 45/4799 and EL 45/4800.

The information in this document that relates to Exploration Results is based on, and fairly represents, information and supporting documentation prepared by Mr Peter Smith, BSc (Geophysics) (Sydney) AIG ASEG, who is a Member of The Australasian Institute of Geoscientists (AIG).  Mr Smith is a consultant to Strike Resources Limited.  Mr Smith has sufficient experience which is relevant to the style of mineralisation and type of deposit under consideration and to the activity which he is undertaking to qualify as a Competent Person as defined in the 2012 Edition of the “Australasian Code for Reporting of Mineral Resources and Ore Reserves” (JORC Code).  Mr Smith has approved and consented to the inclusion in this document of the matters based on his information in the form and context in which it appears.