Strike’s Burke Graphite Project (Strike 60%) is located in the Cloncurry region in North Central Queensland, where there is access to well-developed transport infrastructure to an airport at Mt Isa (~122km) and a port in Townsville (~783km).

CSA Global were engaged by Strike to complete a Mineral Resource Estimate (MRE) for the Project:

These grades place the Burke deposit as one of the highest-grade deposits of graphite in the world held by an Australian listed company.

Based upon the MRE for the Project referred to above, the following Chart illustrates the TGC grades of published Total JORC Resource/Reserves of selected ASX Listed Graphite Projects relative to the Burke Project. 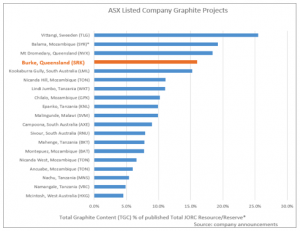 In addition to the high-grade nature of the deposit, the Burke Graphite Project:

Given the above highly favourable project characteristics and with the minimum size of the deposit now confirmed, Strike is planning to further investigate the commercial options and requirements for developing a mining operation of between 40,000 – 60,000 tpa of graphite concentrate (which is typical of the production profiles being considered by many other ASX listed graphite developers), to be followed thereafter by a scoping study.

Graphite is an important component in the manufacture of lithium-ion batteries (there is typically at least 10 times more graphite than lithium by weight in a lithium-ion battery). The use of lithium-ion batteries (and hence the demand for graphite) is expected to dramatically increase over the coming years as environmental and regulatory issues force vehicle manufacturers to move away from fossil fuel-powered engines. In addition, the massive growth of solar, wind and other renewable power sources requires a commensurate increase in the use of grid storage batteries in order to smooth the impact of irregular power supply from these sources.

To test the potential suitability of the Burke graphite for use in lithium-ion batteries (and other applications), an industry standard graphite flotation process was applied to core samples taken at a depth of 41.0 – 56.5 metres from diamond drill hole BGDD001. 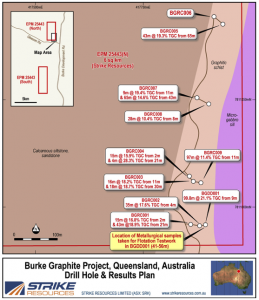 Location Plan for April/May 2017 Drilling, including location of core samples used for testwork

The flotation tests conducted by conducted by Independent Metallurgical Operations Pty Ltd (IMO) confirmed that a concentrate of purity in excess of 95% and up to 99% Total Graphitic Carbon in individual size fractions can be produced using a standard flotation process, where 95% purity is typically considered as the threshold for saleable graphite concentrate.

Of particular note is the distribution of flake sizes produced from the flotation, where the majority (67.9%) of the resulting flake graphite material is characterised as “ultra-fine” (flakes less than 38 microns in size). High purity ultra-fine flake graphite material can be particularly suited for use in lithium-ion batteries, which typically use graphite particle sizes of between 5 – 25 microns for anode material. Strike is therefore encouraged by these initial results.

Graphene is a recently discovered “wonder material” that offers tremendous opportunities in a range of industries, possessing exceptional qualities of strength, electrical and thermal conductivity and impermeability.

Graphene is technically defined as a single atom layer of crystalline carbon in a two dimensional ‘honeycomb’ type structure, but the term “Graphene” is often extended to include material made up of multiple stacked single layers of (single layer) Graphene. Material comprising up to 10 layers of Graphene is sometimes referred to as “Few Layer Graphene” (FLG), whereas material with between 10–150 layers of Graphene is known as “Graphene Nano Platelet” (GNP).

As for single layer Graphene, both FLG and GNP exhibit far superior properties of strength and conductivity when compared to natural graphite and are expected over time to be used in a wide variety of commercial applications.

There are a number of different processes currently being used to create Graphene from natural graphite. In a single test undertaken on a sample of core taken at 51.1 metres depth from diamond drill hole BGDD001 (refer Figures 2 and 3), a process known as “Electrochemical Exfoliation” (ECE) was successfully used at Metallurgy Pty Ltd (subsidiary of IMO) to produce pure GNP material from raw Burke graphite.

In ECE, a lump of graphite is inserted in a chemical solution and an electric current is passed through the solution, using the graphite as an anode. Layers of Graphene then “peel off” and can be collected through a relatively simple process.

The ECE process is relatively low cost and environmentally friendly compared to other processes – yet it can produce very high purity Graphene. Strike is therefore very pleased that the exceptionally high-grade (~20% TGC) and natural conductivity of the Burke graphite allows it to be used directly as an anode in the ECE process, without the need for any grinding, flotation or other costly processing steps.

The information in this document that relates to Exploration Results is based on, and fairly represents, information and supporting documentation prepared by Mr Peter Smith, BSc (Geophysics) (Sydney) AIG ASEG, who is a Member of The Australasian Institute of Geoscientists (AIG).  Mr Smith is a consultant to Strike Resources Limited.  Mr Smith has sufficient experience which is relevant to the style of mineralisation and type of deposit under consideration and to the activity which he is undertaking to qualify as a Competent Person as defined in the 2012 Edition of the “Australasian Code for Reporting of Mineral Resources and Ore Reserves” (JORC Code).  Mr Smith has approved and consented to the inclusion in this document of the matters based on his information in the form and context in which it appears.

The information in this document that relates to metallurgical test work is based on, and fairly represents, information and supporting documentation prepared by Mr Peter Adamini, BSc (Mineral Science and Chemistry), who is a Member of The Australasian Institute of Mining and Metallurgy (AusIMM). Mr Adamini is a full-time employee of Independent Metallurgical Operations Pty Ltd, who has been engaged by Strike Resources Limited to provide metallurgical consulting services. Mr Adamini has approved and consented to the inclusion in this document of the matters based on his information in the form and context in which it appears.

The information in this announcement (including the CSA Global MRE Technical Summary in Annexure A) that relates to in situ Mineral Resources for the Burke Graphite Project is based on information compiled by Mr Grant Louw under the direction and supervision of Dr Andrew Scogings, who are both full-time employees of CSA Global Pty Ltd. Dr Scogings takes overall responsibility for this information. Dr Scogings is a Member of the Australian Institute of Geoscientists (AIG) and the Australasian Institute of Mining and Metallurgy (AusIMM) and has sufficient experience which is relevant to the style of mineralisation and type of deposit under consideration and to the activity which he is undertaking to qualify as a Competent Person as defined in the 2012 Edition of the “Australasian Code for Reporting of Mineral Resources and Ore Reserves” (JORC Code).  Dr Scogings has approved and consented to the inclusion in this document of the matters based on his information in the form and context in which it appears.